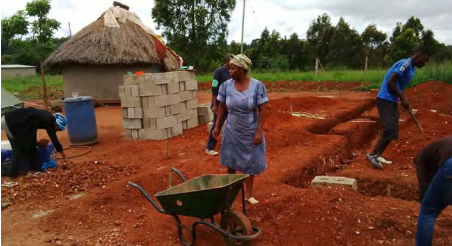 Students enrolled on a building programme have built a two room house for a destitute old woman at Sihhoye. This was part of the students’ practical lesson and they used materials donated by Gwamile VOCTIM staff to build the house for gogo Hlophe. Gogo Hlophe lost all her children and now lives with a primary school going grandson who benefits from Free Primary Education.

The family lived in a makeshift hut built from mud patched twigs, and wooden pillar which were coming off the ground as the hut had started slanting, giving in to the sloppy terrain on which it was built.

The Old woman’s plight was noted by one worker at Gwamile VOCTIM who spoke to the principal asking if staff could lend a hand. The staff then contributed by buying some building material. The situation was assessed and the staff were informed, thus contributions started pouring in.

The Students enrolled for a Diploma in Bricklaying and Plastering, together with their lecturers, offered to use their practical learning hours to build gogo Hlophe the house. One student even contributed two bags of cement when he realised that the material will not be enough, worth noting is that this student paid for his own tuition.

The principal Mr Mokoena said it was amongst the institution’s core values which are Integrity, respect, excellence in teaching, and service to others that they would help people and families across the country.